This web site specialises in antique Parian ware.  So what exactly is Parian ware?

'Parian' is the name now used for a form of porcelain developed in England in the early 1840s.  The porcelain body was made to have a resemblance to marble, and when first introduced it was heralded as an affordable way for people to bring into their homes smaller scale copies of the large marble statues and busts found in Stately Homes.  For this reason Copeland called their Parian wares 'Statuary Porcelain', Minton used 'Parian' in reference to the fine white marble from the Greek Island of Paros and Wedgwood called their wares 'Carrara' after the fine Italian marble.  The term 'parian' ware is now common usage for the output of all manufacturers.  Parian ware is most commonly undecorated allowing the attractive tone of the porcelain and the fine modelling to be appreciated (although Parian ware can also be found with a coloured porcelain body, or with surface tinting).

Although the precise composition of the porcelain body varied between manufacturers, parian wares usually had a higher proportion of feldspar which both gave a more vitrified finish to the surface, a translucency to the body, and also, as a result of its iron content, typically fired to a warmer colour.  As a result the fired porcelain body is closer to marble in effect than the earlier biscuit wares with their purer white colour and more 'chalky' surface.

The main period of production of Parian was the second half of the Nineteenth Century and at its peak there were more than 80 recorded manufacturers producing Parian statues and figure groups, busts, and a range of tablewares and other utilitarian wares.  Some of these manufacturers (for example Robinson and Leadbeater) were Parian specialists whereas others, such as Copeland, Wedgwood and Minton, produced Parian in addition to their other ranges.  Parian wares continued to be made into the Twentieth Century but it is usually considered that the quality of production decreased over time.

The glory of Parian ware is the fine surface and the quality of the form.  Being in the main uncoloured it is easy to fit Parian wares, with their quiet elegance, into both contemporary and period homes.

If you would like to learn more about Parian there is a small number of books we can recommend.  We usually try to have copies of these for sale, so if this is of interest please contact us.

The Parian Phenomenon, edited by Paul Atterbury, published in 1989 by Richard Dennis.  Long out of print and copies are sought after and hence expensive. Nevertheless if you only buy one book, this is the one we recommend for its profuse illustration of the outputs from a range of manufacturers.

The Illustrated Guide to Victorian Parian China by Charles and Dorrie Shinn, first published in 1971 by Barrie and Jenkins.  Now out of print, but copies may be found.

Victorian Porcelain by Geoffrey Godden, Herbert Jenkins first published 1961.  Again, out of print but copies can be found. 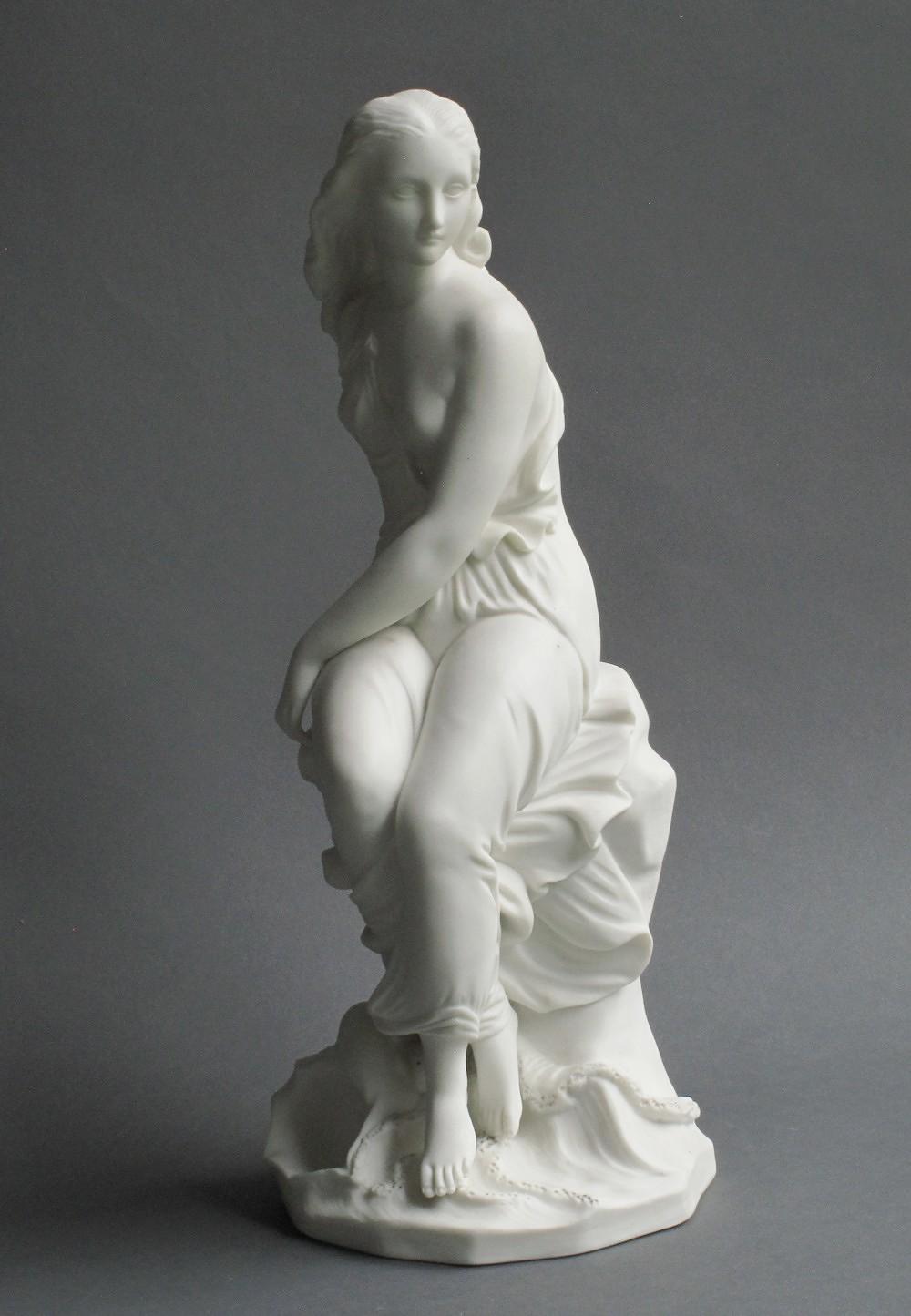 A Minton parian figure of Miranda